In this article, I will be answering the question “What is the top speed of a 125cc dirt bike?” and in general, how fast can a dirt bike go (125cc).

Check out the fastest 125cc dirt bikes below.

Well, a 125cc dirt bike top speed depends on various factors like the riders experience, specific brands, and terrain. For example, a 125cc dirt bike Apollo like the Apollo-DB-X18 (4 stroke, single cylinder) maxes out at 45 mph in perfect conditions.

On the other hand, Coolster’s dirt bike 125cc zooms off at top speeds of between 40-45 mph. Mark you, this bike has again a single cylinder, 4-stroke engine. 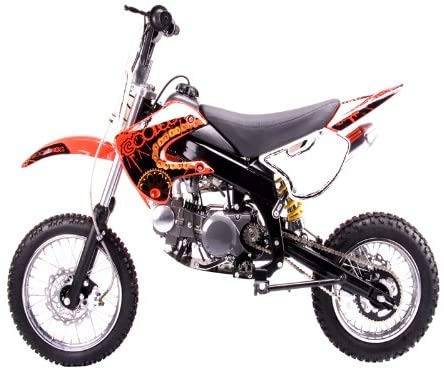 Cheap 125cc dirt bikes such as Taotao Dirt Bike will however go a bit slower and run at about 20-25 mph.

But there are other varieties of TaoTao 125cc dirt bikes led by this 125cc dirt bike which near the likes of Coolster and Apollo’s by offering a maximum speed of 37 mph.

The latter is still a 4-stroke, 1-cylinder so 4 strokes are quite common at this level.

As we know, the 4 stroke Vs 2 stroke dirt bike engine’s debate has been simmering for an eternity now and it rears its head again here.

All the dirt bikes I have mentioned above are 4-stroke.  And it’s clear the speeds depend on the bike and features that each bike comes with.

But on average, a 125 4 stroke dirt bike can go at a maximum of 45mph given an ideal riding environment for a number of our select models.

There is of course a possibility of pushing this beyond the stated limit but it’s not every biker will have the skill to do this.

In fact, and we will see this later, some of the expensive 125cc dirt bikes can hit a formidable speed of as much as 70+ mph.

A 125 2 stroke dirt bike top speed will again swing from one model to the next depending on various factors. However, the speeds are not that far from their 4-stroke counterparts.

As I had hinted, the aforementioned Apollo 125cc dirt bike top speed of 45 mph is beaten hands down by most of the 125cc dirt bikes coming from the bigwig manufacturers such as Suzuki, Honda, and Yamaha, come of which register speeds of 70+ mph.

Here is how some of the other reputable brands rank:

Honda manufactures some of the slickest 125cc dirt bikes. Here are their ratings:

Kawasaki also has a heavy presence in the 125cc dirt bikes category with its highly impressive models. Here they are some:

Suzuki dirt bikes are also big on fun thanks to their nimbleness. Most of their 125cc bikes are designed to super lightweight.

Here are some of their leading 125cc capacity models:

If you are a fan of the Austrian bike maker KTM, you are in luck because the company has bikes with superior agility and engine power. The company pledges to fulfill the demands of young adrenalin seekers with its 125cc bikes.

The king of the jungle here is the KTM 125 SX dirt bike, regarded as one of the most compact full-size dirt bikes.

Its 1-cylinder, 2-stroke engine confidently delivers between 65-70 mph under the most favorable terrain. As usual, achieving this speed is dependent on gearing and a bevy of other factors.

In pursuit of more adventure, some enthusiasts have taken to pit bike racing because of its similarity to motocross.

So, how fast are pit bikes when pitted against dirt bikes?

Well, a 125cc pit bike top speed will again depend on the brand and the technique of the rider. The engine’s highest speeds are themselves also quoted variously. To illustrate, the topmost speed for the SSR Motorsports Pit Bike is between 30-35 MPH. 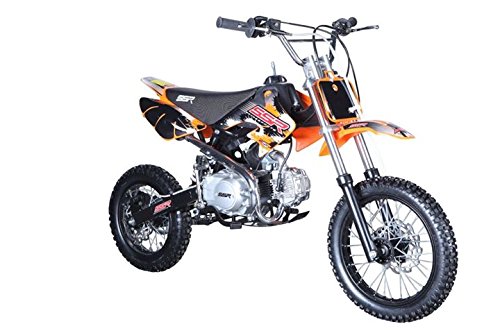 The pit bike’s engine is still a 4-stroke, single cylinder.

Going up, a 125cc Pit Bike from funky bikes hits 55MPH with a talented pit rider. The variations are as wild as in regular dirt bikes.

What Age is Recommended for a 125cc Dirt Bike?

Kids starting 12 years going up are okay with these bikes. If you’re looking for the right dirt bike for 13 year old boys and girls, it’s probably a 125cc bike.

That said, 125cc dirt bikes suit a universe of riders. It has sufficient power for a teen that seeks to test their skill beyond the norm.

But it at the same time works for adults who are yet to master their thing and fear intimating dirt bikes.

The recommended height for riders is between 5 to 6 feet while the seat height should be as follows:

What 125cc Dirt Bike Should I Get for My Teen?

Selecting a 125cc bike from the numerous options can be a bit tricky. What is important is to ensure that your dirt bike will serve all the needs. This you can do by factoring in several issues:

Check out this article for best dirt bikes for 13 year old riders.

We have already mentioned about age and how a seat’s height vis-à-vis a rider’s height can affect his/her comfort and safe handling.

The bike need to be rock solid. This means that a bike with a poor construction and a tendency to break down at every juncture is a big no.

A 125cc model is more of a starter bike so it needs to be easy to engage. This encourages the rider to spend more time riding as well as increasing the fun.

Teens want everything smooth at this level so they welcome a convenient electric starter over other systems.

So, again how fast is a 125cc bike? The answer is it depends on the brand and the riding technique. Various companies make 125cc bikes with different engine capacities starting at a maximum of about 20mph and going all the way up to 45+ mph.

On the extreme end, the best one could hit 60-70mph as per the gearing.

As for the best age, a 125 cc dirt bike suitability still depends on the dirt bike in addition to the rider’s skill and size. But it’s generally great for adults new to dirt bikes and ambitious teens looking for an extra thrill.

We have also seen that pit bikes are rated from45mph and can rise upward based on the brand.