A classic mainstay in almost every modern kitchen, toasters have been keeping food crisp, crunchy, and tan since at least 500 B.C. While the idea was originally exported from ancient Egypt to Rome, it wasn’t until the turn of the 18th century when Scottish scientist Alan MacMaster invented the first modern-day toaster (in 1893).

Originally used as a method to preserve bread and prevent mold, toasting food has evolved into an entire culinary discipline, with full-length books and classes about toasting. Luckily for us, this article is about camp toasters, which still rely on the basic method that the Egpytian’s first used: fire, food, and something to rest your food on.

In this article, I’ll discuss some brief history and science behind toasting food, the different types of camp toasters and uses, and provide a high-level guide to my favorite camp toasters.

Before we talk more about camp toasters, we need to have a hard conversation about an even tougher question.

No, I’m not talking about politics, religion, or the origin of life. I’m talking about something much much bigger. A single question that could very well be the most compelling of our time (spent reading this article):

Why do humans like toasted food, and why does toasting food matter?

Ok- sarcastic writing aside, let’s just assume that toasters are only significant in the world (and this article only exists) because most humans like toasted food.

As I mentioned in the intro, the first record of humans “toasting” food was in ancient Egypt and Rome. This was done specifically as a means of preventing mold growth on bread.

However, if we go back even further (some two million years ago) there’s an evolutionary connection that likely plays an even bigger role in our affection for toasted food: the discovery of how to start a fire and the ability to make crispy, crunchy treats.

One of the leading experts on the historic relationship between humans and food is John S. Allen; a research scientist at the University of Southern California.

In an interview with the now-defunct website, extracrispy.com (but referenced from Sodelicious.com), John S. Allen spoke about this evolutionary leap and the connection to our preference for crunchy food:

In Allen’s words, “sometime between one or two million years ago, our ancestors started to make and use fire to cook food. This made available to them a whole new world of energy-rich foods to eat. Cooking introduced a different, ‘unnatural,’ source of crispy foods (e.g., the crust of meat) and gave the nutritional bonanza that cooking provided our ancestors, it was very useful for our ancestors to be attracted to cooked and crispy food”.

In his book, “The Omnivorous Mind: Our Evolving Relationship with Food”, Allen elaborates even further:

“We like crunchy food because it is an indication that the food is fresh. The actual action of chewing crunchy food and the sound it makes is shown to be satisfying, like a form of catharsis. Studies have shown that stressed individuals prefer crunchy/salty foods as comfort food.”

Full circle back to camp toasters.

While there are surely many other factors influencing our taste for toasted food, at least one of them appears to be our primal pursuit of crispy, crunchy food.

And in the context of John Allen’s research, it appears as if there might just be a direct primal relationship between camping and toasters.

Now crunch on that for a second.

Camp toasters come in a wide variety of shapes and sizes. They are usually designed to be used with a specific type of heat source such as an open flame campfire, a gas grill or stove, or a charcoal grill. Whether you’re backpacking, car camping, or glamping, there’s a growing list of camp toasters to fit most use case scenarios.

Let’s take a closer look at the different types of camp toasters below. 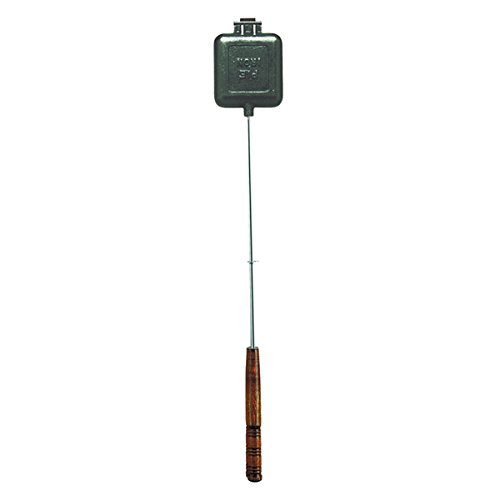 In most cases, cast iron camp toasters are actually designed to cook sandwiches and other food- not toast specifically. That said, cast iron is a do-it-all type of cookware that excels at cooking just about anything you can throw at it- toast included.

This makes cast iron sandwich cookers and toasters a versatile option for minimalists (like me), who like to reduce the number of cooking tools in their kitchen set.

Due to the size and weight of cast iron toasters, these are best used in a car camping or front country setting.

The Rome Square Pie – Cast Iron is a compact and affordable option that is well known in the outdoor and camping world.

The most basic type of camp toaster, grill baskets are another versatile option that can be used to toast your food or cook an entire meal. These work by simply placing your food in a mesh or wire basket connected to a pole, and rotating the basket over an open flame.

Another item from Rome Industries, the Campfire Toaster is a lightweight grill basket that also has adjustable depths for thicker slices of toast (or sandwiches). 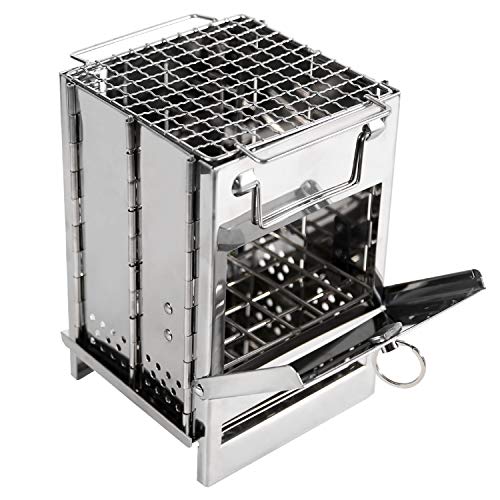 One part barbeque grill, one part oven, and one part toaster. Wood-burning camp stoves are an interesting outlier when compared with traditional camp toasters.

Wood burning camp stoves work by burning small pieces of wood, twigs, coal, leaves (you name it) in a fire chamber at the bottom of the unit. Food is placed on the top of the unit and grilled/toasted to your preference.

While wood-burning camp stoves can be surprisingly light, I can’t imagine a scenario where I would want to hike one into the backcountry. Less is more when backpacking and you’ll be better off using a small gas camp stove.

That said, wood-burning camp stoves can be a great addition to any front-country camping trip. 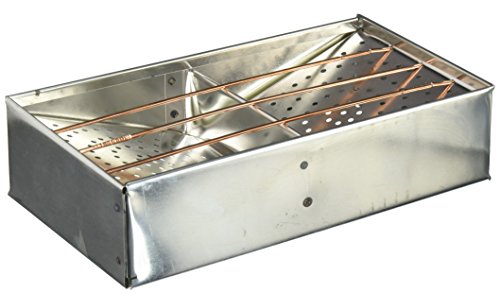 Box style camp toasters generally consist of an open stainless steel box with a tray or trays to place toast, sandwiches, or other food. The box toaster is placed on a charcoal grill or propane camp stove, where the food is toasted directly from the stove or grill, or by radiant heat that’s emitted from the steel box.

While some box-style camp toasters collapse into a smaller size, they are still relatively bulky and I wouldn’t want to take one backpacking. However, they’re a great option for any kind of front country camping or picnic.

At less than a pound and less than 9 inches long, the Camp-A-Toaster is a well-established toaster that will take up minimal space in your kitchen kit. 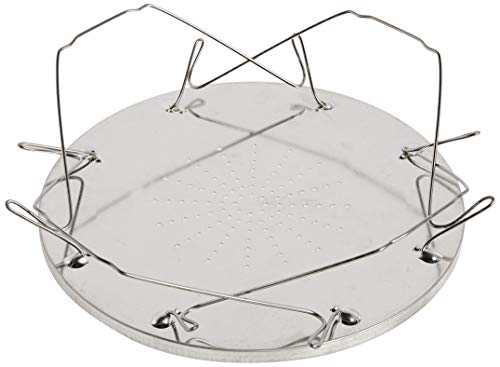 While some of the other options for camp toasters allow you to cook foods other than toast, in most cases toaster racks are designed specifically for cooking toast. Similar to a toaster box, toaster racks are for use with gas stoves, gas grills, and charcoal grills. Toast is placed on (what are usually upright) racks while radiant heat is directed into the center of the rack, which heats the toast.

Like box-style camp toasters, toaster racks are best suited for front-country camping. While you could take a toaster rack backpacking, my preference would be a collapsable basket toaster.

The Coghlans Camp Stove Toaster has a minimalist design and is a great option for conserving space. 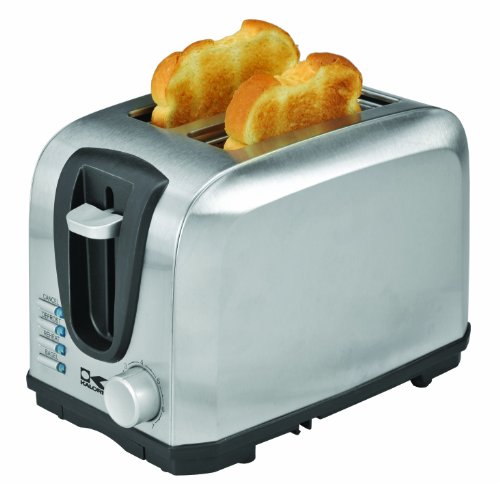 Now that we’ve cleared that up- solar-powered toasters are either powered by electricity that’s generated from the sun, or from direct solar energy (heat).

In all honesty, I wouldn’t recommend a solar-powered charger unless you have a capable solar setup (including panel and battery bank). If you fall into that category, look for a low-wattage toaster like the Kalorik 2-Slice Toaster. The Kalorik uses very little energy (for an electric toaster) and can even be run off of a car adapter- though they recommend keeping your car running if you go that route.

Why aren’t there more solar-powered toasters?

Solar technology has advanced very rapidly in recent years. Manufacturers have opted to focus on developing solar panels and power stations that can power all of our normal appliances (instead of integrating solar technology directly into appliances).

As I alluded to earlier in the article, I’m a minimalist camper and I like my camping gear to be practical for both backpacking and car camping. Because of this, I personally prefer grill baskets.

However, for someone that leans more towards car-camping / front-country camping, cast-iron toasters are an awesome option.  Not only can you toast bread, but you can also make paninis, square pies, waffles, and a whole host of other delicious food.

From the discovery of fire and the creation of “crunch” to the preservation of bread- humans have been toasting food for thousands of years. While technology has evolved, the underlying method for toasting remains unchanged: fire, food, and something to rest your food on.

So satisfy your primal instincts and find a camp toaster that’s right for you. It’s make your next camping adventure that more enjoyable.

Can You Put a Stove in a Nylon Tent?

There are many reasons that a camper may want to bring their stove into a tent. Maybe it

How Do You Make a Tent Warmer?

According to the National Weather Service, hypothermia may occur when the body drops below 95-degrees Fahrenheit. Needless to

Will a Tarp Keep a Tent Warm?